Since they were first invented in 1927, garbage disposals have become a staple of the modern household. Despite their popularity, though, there aren't as many brands as many people think - in fact, most garbage disposals are offered by the same few companies that supply most other appliances. With all that in mind, is a Kenmore garbage disposal from Sears the right choice for your home? Let's take a look at the brand.

What Are Kenmore Garbage Disposals And How Do They Work?

As such, when you're buying a garbage disposal, what you're really doing is choosing between a set of features, options, and construction quality. As noted by the SF Gate, the average garbage disposal will last 12 years, though better models can last 20 years or more with minor maintenance.

Part of this is that most garbage disposals, despite their powerful motor, don't see a lot of use. When something only needs to function for a few seconds every few days (or weeks), even a powerful motor won't wear down its parts very quickly.

As of this writing, Kenmore sells eight types of garbage disposals, ranging from 1/3 to 3/4 horsepower. The amount of power you need is determined by the size of your household.

The main reason for the different power levels is that larger households tend to put more food scraps into the sink before running the garbage disposal. A stronger motor can chew up more scraps at a time, making them a better choice for big households. You don't want to have to stick your hand down the drain to pull stuff out.

Most people settle on a 3/4 horsepower model, even in smaller households, since it's strong enough to handle tougher jobs without the price tag of the most powerful models. If you're not sure which Kenmore garbage disposal to get, any of the 3/4 horsepower models is a good choice.

How Does The Disposal System Work?

Despite the loud noise you hear, garbage disposals don't actually use a whirling blade to chop things up - that's a blender. Instead, garbage disposals have metal impellers (sometimes referred to as lugs) that create centrifugal force and fling things towards a grinding ring on the outside. When bits of food are smashed into the ring over and over, they're pulverized into pieces small enough to pass through.

Running water is an important part of the disposal process - this lifts bits of foodstuff and allows them to move around. Some things get shredded instantly, but in most cases, it will take a few dozen or few hundred rotations to completely get rid of things. If you have a lot of stuff waiting to be ground up, it will take longer.

What If It Gets Stuck?

Most garbage disposals have a manual way to turn the impeller blades, and some have a switch that can reset the electric motor. In most cases, the machine can be returned to normal working order by manually cranking the bottom until whatever is stuck in there gets knocked loose.

To help prevent buildups and problems in a Kenmore garbage disposal, you should occasionally put a stopper in your sink and fill it with hot, soapy water. Remove the stopper and let the hot water flow down the drain. This will fill the garbage disposal, melt fats and oils, and generally clean the pipes. It's also more affordable than going to the store to buy a specialty cleaning product.

Several factors help to separate Kenmore from other brands. First, the stainless steel components are resistant to corrosion and help to ensure a normal shelf life that meets or exceeds comparable units. They also have a lot of torque (to improve grinding performance) and are built to be lighter and easier to install than most other units.

The part that really matters is the inclusion of a reset button. Garbage disposals are known to occasionally jam, and the use of a reset button significantly reduces the chance you'll need to use a wrench and manually get things working again.

Sears also uses their "Quiet Pak" to reduce the noise of the disposal, but most households won't notice a significant difference.

Pricing can vary by store. At the time we checked, the 70361 model - a popular 3/4 horsepower - was selling for an MSRP of $$$ (can drop during holiday sale) on Sears.com, while Amazon was selling the same unit for $$$. Despite the relatively low number of places selling Kenmore appliances, it's worth looking around to see if you can get a good deal - especially around a holiday.

Kenmore garbage disposals are generally reviewed as good, but not great. Since the brand is affiliated with Sears, we decided to focus on the reviews from Sears.com, since these provide a fairly accurate picture from customers. All reviews mentioned are as they appeared in late June 2018. 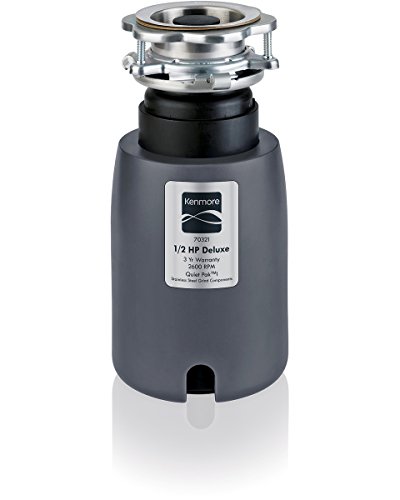 The smallest model, the 70235, had a rating of 4.0/5 after 8 reviews. Half of these were five stars, two were four stars, one was three stars, and one was one star. Most of the positive reviews cited appreciation for how easy it was to install. The low review cited a unit that stopped working after 7 months, and the buyer found that the 2-year warranty was only for parts.

The next model, the 70211, moved up to 4.5/5 after 53 reviews. That's enough to get a good sample size, and 45 of these reviews were positive. Only two were outright negative, with the last six feeling neutral. Notably, one positive said their garbage disposals tended to last about five years each time (which they were satisfied with), while a more critical review suggested looking for a unit with more stainless steel.

The last of the low-budget models, the 70321, drops to 4.0/5 after 53 reviews - the same number as the previous unit. Of these, 42 reviews were positive, and seven were negative, with the last four in the middle. Positive reviews cited how quiet and efficient it was, while negative reviews mentioned an issue with the rubber hush cushion slowing their flow of water too much. 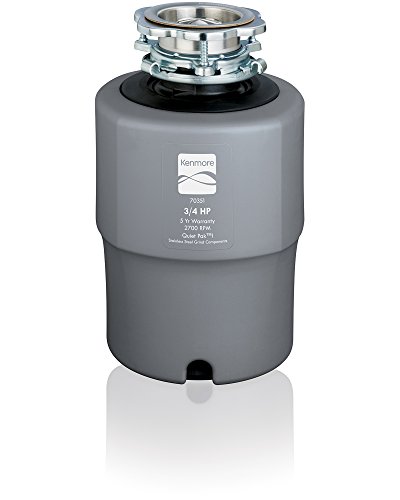 The 70351 is the mid-range model, and as the first 3/4 horsepower unit, it's also one of the most popular. This unit remains at 4.0/5, like the previous model, after 31 reviews. 22 of these reviews are positive, while six are negative and three are neutral. Positive reviews cite the unit working well and installing easily, while a negative review noted that an internal tooth broke after light use and it was hard to schedule a service appointment. 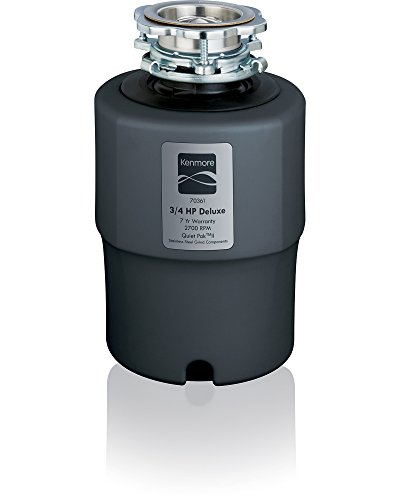 The 70361 is a more deluxe unit, though it has the same horsepower as the previous one. It's also, worryingly, the lowest-rated of the group - at 3.5/5 after 30 reviews, only 20 people liked it, and 7 didn't. Criticism includes complaints about slow draining and issues with customer service, and given the higher percentage of complaints on this model, we can't recommend this particular Kenmore garbage disposal.

The 70413 is the most powerful - and most expensive - model that Kenmore offers. It returns to the average 4.0/5 score seen on several other models, with 15 reviews in total. 12 of these are positive, while the last three are straight 1/5. Positive reviews praised how quiet it was, while the critical reviews cited leaking and high volume. Without independent measurements, it's difficult to tell if the noise is just a matter of perspective.

Kenmore garbage disposals remain in the "good but not great" category - below some units that are great from brands like InSinkErator (the original garbage disposal brand), Waste King, and Moen. It's worth noting that some of these better garbage disposals are sold for the same price - or lower - than the Kenmore brand.

Overall, Kenmore is better than a true budget brand, but it's not the best value for your money. Still, some people don't want to get anything else, and that kind of customer loyalty doesn't come easily.

As we alluded to earlier in our review of the Kenmore garbage disposal line, we think these garbage disposals are squarely in the "good" range. While there are the occasional hiccups with parts failing early, most Kenmore units are reviewed as quiet, effective, and reasonably long-lasting.

What concerns us is the state of Sears as a company. As of mid-2018, Sears is still in the midst of a years-long decline in its business. It's already announced plans to close unprofitable stores and generally try to consolidate itself so it can return to profitability. They have shut down hundreds of locations in the last year or so.

If the company continues its decline, it may not be able to fulfill warranties, provide replacement parts, or send out service technicians to your area. In short, if you have a bad unit, you may wind up out of luck.

Admittedly, recommending that people avoid buying their products will only worsen their situation - but our goal isn't to protect Sears and Kenmore, it's to protect you. As such, it's difficult for us to recommend buying any Kenmore garbage disposal when better, more affordable models are available from companies that aren't likely to disappear in the near future.

Like many Sears products, the Kenmore garbage disposal line tends to go on sale on a regular basis. They're particularly likely to be on sale around Memorial Day, the Fourth of July, Labor Day, Veterans Day, and Black Friday. In-store and online deals are also fairly common.

The issue, of course, is whether you want to buy a new unit before your old one breaks down. If you've had a garbage disposal for at least 11 years, it's time to start thinking about getting a new one. You should do this even if you don't plan to install the new one right away - your garbage disposal won't necessarily break down right before a convenient sale.

The downside to this strategy is that it could lead to your warranty expiring before you even install the unit - and if something goes wrong, you may be out of luck. Ultimately, you'll have to decide if the risk - mild though it may be - is worth the savings.

Another strategy is to create an emergency appliance fund. If you set aside money ahead of time, you can be ready to buy a new garbage disposal (or any other appliance) when they break down. This may not get you any savings - although you have a good chance of being able to find a Sears coupon - but it will at least ensure that the sudden hundred-plus dollar cost doesn't break your budget.

Do not buy a used garbage disposal, regardless of how good the deal is. It's not worth it.